WHY THE CRTICISM EHHH???? 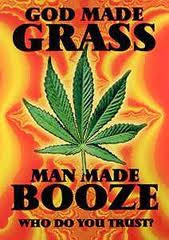 So I hear say dem been arrest some marijuana sellers and smokers for Oshodi area. Nawa ohh.
Anyways shaa all i gotta say be say make all those so called Taskforce people take time ohh :)  Afterall na these same taskforce peeps dey even patronize ibo sellers pass. Instead of them to go find people wey dey commit serious crime, then na guys wey dey smoke ibo wey dem dey look for. And let me just make it clear that there is absolutely nothing wrong in smoking weed. Its so funny to see how weed is always potrayed as something negative, especially in Naija. When you see someone who smokes weed, the person is automatically a criminal, cultist or a bad boy....what a shallow mentality. You see growing up in Naija, I'm sure we were all brought up to see peeps that smoked weed as bad boys, and It was just one of those things that I never wanted to get myself involved in. But mehnn, as I enter Yankee, I began to see life in a different perspective jare. And I must say, ibo is probably one of the best things that happened to man...believe it or not.!!! Smoking weed is one of my hobbies, and I no dey shame or fear to talk anywhere or anytime.

Okay make I ask una this question: Have you ever heard that someone died from smoking excess weed???? OFCOURSE NEVER!!!!   But how many people have you heard that died from taking excess alcohol or cigarrete?  DEM PLENTY SCATTER EHH. So therefore what are we talking about sef (in a thick igbo accent...ha ha) Well if weed was that bad, I dont think doctors would be prescribing it for people here in Yankee and other western countries.

So in a nutshell, I would like all of you anti-indian hemp individuals to stop criticizing this very beautiful natural product, cos you really dont know what you missing....ha ha
But what really surprised me when I was in Naija, was the amount of people that smoke weed recently. I can vivdly say that almost everyone I hung out with in Naija (both female and male) all smoked weed.
One thing I know for sure be say we must witness the "legalization of weed" before the end of our generation...and im don dey happen already small small :)

Back to what I was saying...yeah so make those police task force leave those boys jare, as long as they not killing or stealing from anybody. Afterall man must chop somehow.
But come to think about it, who is our Police trying to decieve ke? We all know what the deal is.....You arrest these guys and tell the public, so we go dey think say una dey do una work well. But at the end of the day, when dem bribe una with small qudi, una go release them....and business continues as usual. Smchew...silly touts!