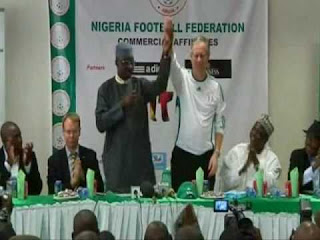 So our so called EFCC now want to investigate the controversial appointment of our uncle Lagerback. Why? cos one of the coaches who came for the interview last year (Glenn Hoddle) recently said that after his interview, certain Naija sports Ministry officials had told him to hike his pay from $900,000 to $1.5million in order for them to give him the job.  So now they trying to see if Largerback accepted the deal and thats why he was being paid $1.5milla for his five months of performing trial and error with our superchicks during the world cup :)
Like seriously why must our own thing always dey different? Sotey curruption even follow for hiring process of a foreign coach? In fact you see this currption just dey our gene, and its here to stay for a long long long while.

Umm but also i would really love to know where our so called EFCC was when this mans contract begun? And also assuming Naija did well and even reached the second round of this world cup, would this topic have been brought up?
SMCHEWW... this is pure BULL jare...medicine after death. Abeg EFCC or whatever u call ur name, make una go sitdon somewhere juo...or maybe in order to keep unaselves busy, why dont u guys start going after peeps like IBB, OBJ and other heavy political criminals out there. Then i go dey believe una die ehh :)
Posted by alex