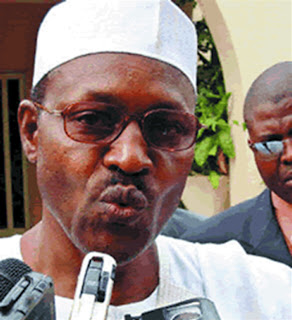 So after the whole bomb blasting thingy, Our uncle Buhari had to come out of his hybernation to blast brother GEJ. These were some of the words he had to say:


“Yes, there is a wave of terrorism all over the world, but serious countries have shown serious efforts to combat the trend. But in our own case, in our own country, there is yet to be any serious attempt by the government and the security agencies to contain or to go after those who are perpetrating this evil.

“Up till now, we are yet to see any footage on the UN building attack. Does it mean that there is no Closed-Circuit Television (CCTV) in that place?
“What has happened to the report by the UN officials that they informed the Nigerian government ahead of this bombing? These are serious issues that we must address as a nation.
“All we hear at the end of each attack is either the Movement for the Emancipation of the Niger Delta (MEND) claims responsibility and the President says it is not MEND and cannot tell us who it is; or we hear that it is Raymond Dokpesi because he is supporting a different politician and once he comes back to support the President, he is no longer the one throwing the bomb. They no longer trace anything to his phone.
“When has the President and his media aides become the first line of briefing in matters of arrest? Is it not the IG who is supposed to do that? It clearly shows that there is an attempt to cover up something, somewhere.

“These people are reducing governance to a child’s play. They are making us a joke to the whole world. Is this how a serious government should respond to this kind of national embarrassment, national carnage?,” Buhari asked.

Honestly speaking, uncle Buhari's statement dey make too much sense, cos a lot of questions certainly need to be asked.
But on the other hand, ummmm is anybody else thinking what I'm thinking?????  ha ha
Cos this kinda sounds like same ole politics to me for some reason....He's probably motivated the northern youths to go around bombing places.....then try to make the presido's administration look very bad and unable to tackle situations like this. But on the other hand, I may be totally wrong tho. I 've always seen Buhari as a real honest guy tho, and I believe he has a genuine interest for the nation. This is one guy that has always ran for election in a legit way you know. But I would have expected him to provide a solution instead of criticizing our presido. Since im dey talk say our presido dey incapable of finding the bombers, then make im go find them himself nah....after all no be im own peeps?
Infact I just dey confused jare, and its even more frustrating to know that there are a group of anonymous political touts out there who are the brains behind this whole turmoil in Naija.

Anyways shaa, one thing I know for sure be say if to say my man Ribadu was in power, a lot of these bullsh** wouldnt have been going on :)