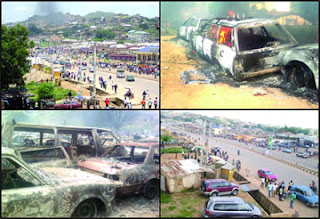 So fight don again for Jos again oh This time, dem talk say about 20 peeps were killed, while up to 50 cars were burnt. The yawa been burst when Muslims went to go do their eid-el-fitri prayers for one mosque wey been dey located in a predominantly christain neighborhood. Na so the Christian youths start to protest ohh...dey talk say if the Muslims no gree make dem open church for predominantly Muslim areas, then wetin go make them feel say dem go fit come do their prayers for their own home turf. Before you know it, one thing leading to another, fight don start ohh (as we all know say religious fight no dey hard to start for Naija). In the process, peeps were killed and wounded.


Prior to Monday's clash, there had been a rumor in the state that some people were planning to disrupt the Eid-el-Fitri celebration in the state, especially in Jos, in revenge of the disruption of last year's Christmas, which was marred by multiple bomb blasts which led to many deaths in some parts of the state capital.


Yes, its true that our Muslims brothers messed up our Christmas celebration last yr in Jos. But i dont think Christians should think of retaliating like this nahh. What happened to those Jesus preaching which stated that when a person slap you, do not retaliate. Instead, turn the other chick make im slap am join. Christians are supposed to be peace makers, and should not get involved in all these toutish incidents. But no the other hand, I see their pain jare. For how long will they endure all this brutalities and killings being performed by our Muslim brothers? It has really gotten out of hand jare. Only God will solve Nigeria's problems, cos dem too plenty jare.

And as much as I try hard to be a good Christian and obey the bible, one thing I certainly know for sure be say if person slap me, make im dey ready to receive im own wozah too shaa.....Cos were I from na jungle oh.... filled with only dinosaurs...No Barneys!!!...period