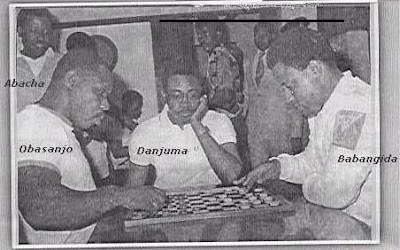 So I'm sure most of una know say OBJ and IBB no dey use eye see each other. They always pointing gingers at each other, accusing each other of this and that...just acting like a bunch of dry p***ies in public. Anyways this was what IBB said about Baba recently "

"Former military president, General Ibrahim Badamosi Babangida (IBB), yesterday took on the administration of his former boss, Chief Olusegun Obasanjo, saying the latter’s government between 1999 and 2007, lacked foresight and imagination. The former military president, slammed the eight years civil rule of Obasanjo for wasting the economic affluence experienced in the country then."

HA HA...pot dey call kettle black...The last time I checked, both of these dudes were, and will continue to be the major hardcore criminals of all time in Naija. They looted billions of Naira, and wrecked our nation. And I dont still understand how these two animals aren't in prison all this while. I'm very sure EFCC go dey act like say these two men no dey even exist for their radar. What a pity.

Anyways I think its very important to continuously remind these touts that they both did NOTHING...and I mean ABSOLUTELY NOTHING for Naija, during their various tenures as Presidents. Therefore no right thinking human should ever care about whatever it is they have to say. And since EFCC has become a bitch by continuously licking sucking the balls of these two individuals, then I guess we wont be seeing the end of them anytime soon :(

Situations like this just makes me miss FELA ehh...cos if that dude was alive, I swear these touts wouldnt have even thought of being a civilian presido.....talkless of contesting sef....ha ha
Posted by alex