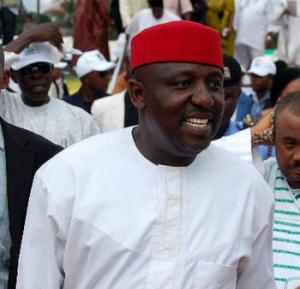 OWERRI—Non-indigenes, especially Northern Muslims in Imo State have been assured that their children will also benefit from the free education policy of the government.

Governor Rochas Okorocha said this when he hosted Muslims in Government House, Owerri,.
Okorocha said: “My administration will not discriminate against non-indigenes but will rather ensure that everybody benefits from the policies and programmes of the state government.”
The governor, who promised to sponsor some Muslims on pilgrimage, said “as a detribalised Nigerian, I will always engage in actions that will promote unity and peaceful co-existence.”

You see ehn, I've always been a big critique of all our so called leaders...but the only peeps I've always, and will always give respect to are the governors of Lagos, Rivers, Akwa Ibom, Delta....and maybe Edo. But ever since this Rochas guy came into politics, my spirit just accepted him immediately. I've been a big fan of him ever since then, cos I believe he will come in and make a big positive impact in my precious Imo state (and yes I know i've said this a thousand times in my previous posts about him..ha ha)....and it's all coming little by little ehh. I wish all those other useless governors could learn from this dude right here. Just a few months in office, he has done a whole lot that his predecessor didn't do in 4yrs. I just cant wait to see what Imo state would look like in the next 8 yrs ehh. I no go even surprise if McDonalds or Burger King go soon come open branch for Imo. Shey una think say im no fit happen? Well, make we dey look nah....ha ha

Imo is just setting an example for other States....cos while our igbo people in the north are being killed, we dey offer their own people free education...and even sponsoring their pilgrimage to Mecca ohh.....No Be Beans nah!!!!....Rochas u too much jare....Keep on making all we Imo peeps proud jare......hopefully other governors will take note......oops I forgot they wont, cos the busy looting right now :)

and as per the "pilgrim trip" levels, Uncle Rochas you are on your own shaa....cos me no really buy that idea at all :(