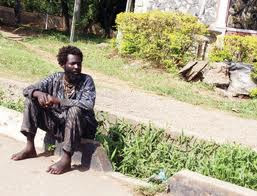 About 2.5 million Lagos residents have been found to be suffering from one form of mental illness or the other, the state Commissioner for Health, Dr Jide Idris, has said.


Before I even start to comment anything, make I first LOL..and HA HA HA HA...BUHA HAHA !!! This is on of the realest ish I've heard coming out of the mouth of a commissioner...ThankGod I wasnt the only oen that noticed this

But to be honest, I'm not even surprised at all. I was even thinking that the number will be way higher. Cos seriously, there are a lot of crazy people in Naija in general, talkless of Lasgidi. I've always known this. But it was my wife who really brought it to my attention when we both went to Naija.....Just coming out of Lagos airport, she started noticing a lot of stuff.....I remember once we came out of the airport, people just dey shout like say dem dey fight each other...some people trying to fight each other just to carry your bag...some people just looking at you and smiling for not just reason...police flogging people with koboko. Infact there was a lot going on at that moment...and remember her saying "where the hell am I".....and I gave here my usual response "baby you don see am nah...Welcome to Naija".

I think the funniest was when we were driving around Ajoa estate, she saw this two grown ass men on the road play fighting and trying to grab each other’s d**k....and smiling like they won lottery or smth. Na so my wife just asked me "It seems like there are a lot of crazy people here in Lagos" and I was like that’s not true. Then her having a degree in Psychology, she started to explain to me that madness is not only the people you see running naked around the streets. There are different types of madness, and as long as someone is doing something that doesn’t look normal, then that madness for real. No be small explanation she give me ohh. That was when I now saw that she was actually saying the truth. Then she also saw the bus stations, and how agberos, touts, conductors and passengers them just dey ginger for anyhow..infact that sealed the deal for here right there.

He said, “we should not forget that a lot of social ills in the environment, such as hooliganism, psychotics and people roaming the streets have some relationship with mental health disorders.”

The fact is that there are a lot of peeps suffering from mental illness in Naija...and cos dem never dey naked dey waka for road no mean say dem no dey mad. And its hard for we Naija peeps to notice it, cos we are already used to the whole environment, therefore everything looks very very normal to us. But na usually foreigners fit notice the rate of madness in our country. You go see man wey dey fully dressed up with correct suit and tie, and you go think say na normal person. But make mistake go jam im moto, or do something wey go provoke am...then na there you go see straight up mental illness.

Anyways I think this number will continue to grow cos it’s really hard to be normal in Naija. Even if you want to, there's always someone that will provoke you and bring out the madness in you. Or the society itself will make you turn mad by force. Like seriously imagine living in Lagos for even 1yr, and you wan tell me say the madness disease no go affect you? Maybe only if you are living in the Island and barely come to the Mainland area....then you might escape the madness somehow. Infact ehhn I no just understand.

And I think what makes this worse is the fact that we dont believe in medication. You see I never used to believe in all that medication sh** when I came here. But ever since I've been with my wife, she always tells me the benefits of medication and stuff like that. Trust me, there are a lot of crazy people here in Yankee. I believe Yankee even have the most crazy people. But they put most of these people of various types of medications, depending on the type of illness you have. And I've noticed that these medications do really work and help these individuals out. And when they are off their medication, you can certainly notice the difference in their behavior and stuff. But since we Naija peeps no believe in medication, and we feel we all normal, then i guess we go just dey carry our madness dey waka dey go

Our politicians, police, agberos and everyone else involved in this whole religious crisis and turmoil in our country, are all suffering from major major mental illness...and did I forget to add that majority of the people involved in selling goods or services have their own type of mental illness too...cos as far as I'm concerned the customer service in Naija is -0