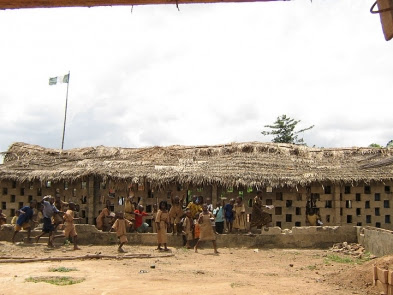 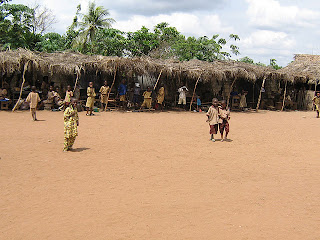 So this is a picture of a primary school located in Ogun state. You see its 2011, and it's just painful to see that such type of school still exists in our country....a whole Giant of Africa/5th largest oil producing country in the world. This is a state who’s former governor/tout Gbenga Daniel, looted all the lootables while in gov't. Okay yes none of us for hia be saint, and I'm sure if most of us are given the opportunity to be in power, there's a big possibility of us misusing it. But what I don’t just understand is this..."how could someone steal billions of Naira, and yet have no remorse whatsoever of doing smth positive for the people who elected him." I DONT JUST GET IT AT ALL. Look at governors like Fashola of Lagos, Amaechi of Rivers, and Godswill Akpabio of Akwa Ibom. You think say these people no dey loot money too? Ofcourse they do. But for the fact that they are doing tremendous jobs in their various states, nobody really cares about whether dem dey thief or not. So I dont just understand why these other government touts cant do the same. As I always told my guyzes, Imagine say person like Uncle Jonny, or any other future Naija president, actually come out and provide 24hrs electricity in Naija. That will be the greatest achievement of any Naija president nah. And even after that, if he comes out and openly steal govt money, nobody go vex for am. Even sef nah we Naija peeps go dey beg am make im thief more...he he. Why? Cos he has achieved what no other Presido has, and life is now made easy for we the Nigerian peeps. ITS JUST FREAKING COMMON SENSE. Do smth that will have a positive significant impact on your people, and then you will be loved forever. But instead most of these our so called leaders/baboons just wan suck every last drop of milk wey dey Naija breast, and do nothing...as in absolutely nothing....Na Nukkas. No be so eh.


And the most ridiculous and painful aspect of the whole matter be say 2days ago, this na wetin come out for news.
Abeokuta — The Ogun State government will spend about N2 billion on textbooks it intends to provide for six million students in public primary and secondary schools in the state. The state's Commissioner for Education, John Odubela , who disclosed this to newsmen in Abeokuta yesterday, said the textbooks would cover all subjects. He also noted that the schools would be mandated to monitor the books, while the government would improve school libraries for safe keeping.

You see ehhn...the kind amounts of money wey person don hear for Naija news ehh....now sef, million too small....these days its usually billion this, billion that. At least once in three days, You will hear a news that talks about billion this and that on various projects. And yet there's nothing to show for it.
So my question is this ohh...."why can’t the Ogun State govt use this so called N2billion they claiming to use for books, and build real standard schools?" Cos as far as I dey concerned, this is just pathetic and unacceptable.

This is why I will forever give the biggest props to Gov. Amaechi of Rivers State. Pls if you have never been to Rivers State, or if you haven’t been there lately, then you have to go see for yourself. If you go to all the state schools across the state (even in the most remote/local areas in the state), they all have the same building plan, excellent learning environment as well as recreational facilities......each student have their own personal laptop in class......infact, everything is all American standard....and its FREE.
Now thats someone who understands the importance of education to children, who would inturn be the future leaders.

I think its reached the point where its only God’s special intervention that will change Naija :(