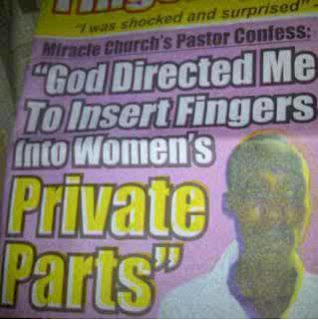 Okay Let us all agree what this dude said is true......for the benefit of doubt ohh.
But with common sense alone, If I was a woman, I go really ask myself some kind important questions like "why would I even let this hungry crazy looking individual even touch their cloth...talkless of private part ke?....and I'll have to ask him why do you even want to insert your dirty fingers in my private part in the first place? what are you looking for in there? Are you a certified Gynecologist? What do you know that you are doing?????? How the f**k will God tell you to do something like that..of all things ke?

Infact I think I will start blaming all these women...cos a lot of incidents where pastors seduce women in various ways, have been made known to the public. But yet, more women still fall victim to touts/animals like this. You know what? I think this is a way for some women to misbehave, and later act like say dem no been know wetin been dey happen. Cos think about it, imagine you as a woman nah...then one day in your church, your pastor said he will have to do a special pray/spiritual work for you, and this that that that blah blah blah. And when that time comes, in the process of doing the so called work, he starts telling you to do things wey even small pikin go know say that one no suppose follow for the so called spiritual work. But yet, you still let him have his way. And the worst be say a lot of these women keep such thing as a secret....umm shooooo. Since you are very much aware that what the criminal did was another type of spiritual prayer on you, then why not come out and expose him huh? I've heard about some women saying sh** like "I did not want to talk because I was scared" or "the pastor threatened me not to say anything" or "he used charm on me" or even "blah blah blah blah".   You know what...Thats some ridiculous bullsh** right there.
You call yourself a Man of God, but yet you wan dey do wetin other normal peeps dey do.....These idiots wonna eat their cake and have it. No No No Nukkas. Its either You take one or the other. Afterall nobody been force them to do work of God nah.
You see, If there's a set of people that I hate the most in Naija are our Police and so called Men fo God. I swear these are the two things that are making us seem like we not moving forward at all in Naija. Church & Police....what do they have in common? They are both the hot money making industries in Naija. You see them almost everywhere you go, and they always act like they have your interest at heart, but at the end of the day, its all about wetin dem go put for their pocket/stomach. And when I say churches, I'm referring to all these pentecostal churches that are just opening in ever damn corner of the street in Naija. 99% of them are just mad criminals, looking for a way to liberate themselves out of poverty. Getta f**k outta here with all that acting of yours on tv and on the pulpit, acting like you care for your congregation.....but you're just all about the money......
I dont just understand why people keep on falling victims for these type of scams.....WAKE UP GUYZ.......JEEEZ!!!

God directed me to insert fingers into womens private parts...How pathetic.
Wait a min..the dude did not say his own fingers ohh...he just said fingers, which could be other peoples fingers other than his? WTF IS GOING ON IN NAIJA THESE DAYS???
Posted by alex