NAWA FOR OUR JUSTICE SYSTEM JARE!! 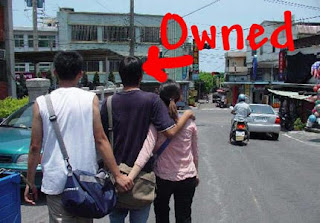 So I hear say for North, a bachelor was sentenced to 4 yrs in prison. I'm sure the first thing wey go enter anybody mind be say the guy don probably thief smth, or maybe im almost kills person, or something really crazy. But can you believe say na just because he tried to seduce a married woman??? LOL LOL

Mehn no kind news wey no go come out from Naija I swear.

Bello alleged that sometimes in July 2010, Umar Sade started wooing his wife Mars Munira Mohammed in an unlawful way suggestive of his intention for a love relationship and she reported the matter to him.
Bello told the court that when he heard the complaint, he approached the man and warned him to desist from any kind of interaction with his wife, and moved his wife from their former house at Danjuma Goje to Federal Low cost in order to blocked him from her.

LOL WOW.....Okay as much as I dont support the bachelor in any way, but at the same time......isnt the woman's husband such a BIG WET P***Y?? How you go move your wife to another house just because another man wan chop her...like come on. Infact ehn, he's such a BIG OILY WET FAT BUSHY P***Y for real. I can’t just imagine someone disturbing my wife, and I later accost the person. But I going to the extent of moving her?? Nawa4me ohh. Cos if I hear say the guy do am again, then I'll have to take laws into my hands by cutting off his wee-wee and make him eat it right in front of me. Period!!!

And even after he moved his wife from there, the bachelor guy still found a way to contact her and sent her a Zain N500 card. Nawa ohh this guy na warrior ohh. I’m sure im get something very bright wey dey inside that woman, and na only am dey see the thing. Maybe the woman husband dey see the thing too, and na why im move her somewhere else sharply...I wonder what that is shaa :)

He said the accused put two calls to his wife and Police arrested the man at the scene of the conversation with his wife asking her if her husband was at home, later he was released on bail.

All I can see is that the woman should be put to prison too, cos I no sure say she dey tell her husband whats really good.....I bet she was giving this man some kind of green light...thats messed up tho
Infact she's a d**k, while her husband is the p***y in this story.

And also ehhn, nawa4 our justice system ohh...how you go give person 4yrs because of seducing a married woman ke? Then what if to say my guy been come chop the woman nko? that one go be straight up death penalty na? Anyways I forgot this happened in the north...so i guess anything goes :)