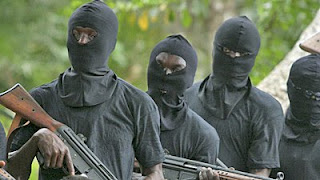 Yesterday, seven Nigerians were sentenced to 12yrs imprisonment for allegedly attacking Equitorial Guinea's presidential Palace last yearr February. They were found guilty of terrorism and fined $310,000 in addition to their jail term.
Now I can vivdly agree that are becoming a terrorist country. The fighters claimed to be members of the Movement of the Emancipation of Niger Delta (MEND)

You see I'm beginning to believe that Naija is a terrorist country.....Cos whatta hell are those idiots doing in another country....I'm just way too sick and tired of these negative news everyday.