ANOTHER BRUTAL KILING BY OUR POLICE...... 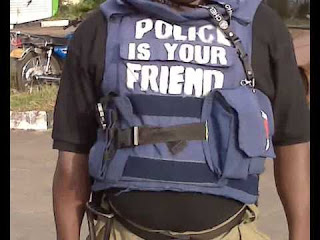 This week, a Police officer attached to the Onitsha Police division shot and Killed Mr Nnamdi Igbokwe this week.
What happend? The deceased was riding an okada with his friend on thier way to go barb their hair, when they saw a police checkpoint, but divreted to another street in oder to avoid being harassed by these set of olokpas.

Once they branched off, they parked the bike and went into the salon, but one of the policemen traced them and wanted to carry the parked okada. But Nnamdi refused and queried the rationale behind the policeman carrying the stationary bike.
So there was exhcnage of words between both men, and before you know it, the policeman brought out his gun and shot the deceased directly on the head, killing him instantly

Only in Naija that a group of crude, uneducated and ill-mannered hooligans are employed as Police officers, given guns to carry around, killing innocent citizens and committing various despicable crimes without being brought to book. I really weep for my country
Posted by alex