STATE POLICE USES THE N WORD AND TERRORIST ON A NIERIAN!!!..... 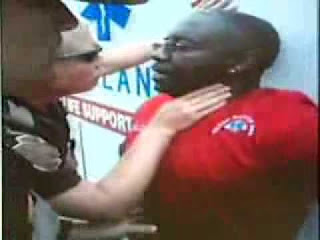 My people una don see wetin our dear Mutallab don cause for we Nigerians???

A veteran State trooper Lt. David Rea is under fire for allegedly making racist comments to  Nigerian real estate broker, calling him a "terrorist"  during a heated confrontation at a Patriots game in Massachusetts.

The victim, Mr Oryema Anuonymere, stated “He called me a monkey, a nigger and a terrorist. He said I should go back to my country,” Anuonymere, who has lived in the United States for 20 years, told the Herald. “It’s a terrible situation. I’m afraid. It’s been very difficult for me.”.........My guy no fear, cos u not alone.... afraid dey actually catch all of us wey dey here for Yankee too, cos u never know what u gonna expect.


Mr. Oryema has filed a complaint with the against Discrimination while another trooper, Kris Boehnenberger lodged a separate complaint with state police brass making similar allegations against Rea. Boehnenberger’s complaint, which was filed two days after the incident, alleges the veteran cop recounted the confrontation inside the barracks, calling Anuonymere “a knuckle dragging monkey.”
He indicated that the suspect stated, ‘You’re only doing this because I’m Nigerian,” the trooper wrote. “Lt. Rea then claims his response was, ‘No, I’m not. It’s because you’re a 'NIGGA.’


Infact why am I even acting like i'm surprised?....First of all, this incident occurred in the State of Massacheussetes, which we all know is a very racist state. Secondly, our bros  Mutallab just made life easy for these these racist idiots to start treating us in a condescend manner.


Anyways one thing wey me myself  know for sure be say any white man wey make mistake call me NIGGA or MONKEY, im own don finish that day-that day ehh. Worst come to worst, na deportation get me sha :)