EVER IMAGINED HOW MANY NAIJA PEEEPS TRAVELING IN AND OUT OF NAIJA EVERY YEAR? 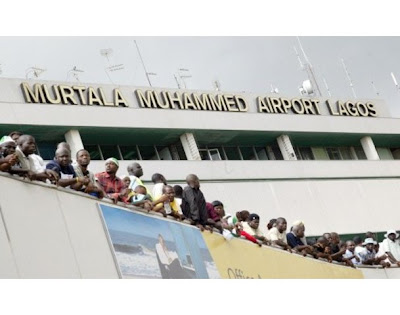 PASSENGER with cargo traffic at the country's premier airport, the Murtala Muhammed Airport has been on the rise in past two years. The airport manager stated that over five million arriving and departing passengers were processed in 2009 and over six million in 2010, representing 11.41per cent increase in passenger movement.

You see this has been smth that i've been perplexed about. Dem talk say Nigeria dey among one of the world's poorest countries. But the number of people that travel on a daily basis ehhn.....i weedah ehh. For some reason, I've always been curious to know how many people be traveling in and out of Naija...and good to know the answer now. Later u go hear say foreign embassies  in Naija (esp US embassy) are very cruel and hardly give our people visa. But i no just understand why people dey talk like this tho. I've travelled a lot in and out of Naija, and anytime i dey inside plane, its always full.

Everyday, there's always an international flight leaving from Lagos, and they are always full. At first, whenever i was leaving from Naija to Yankee, I usually took connecting flights to Europe (mainly British Airways, Airfrance, Delta, Lufthansa and other) before finally going to Yankee. And I noticed that when this plane leaves from Lagos to Europe, the plane was always filled up .....when it stopped at any of the European countries, a lot of Naija peeps get off the plane, and in the connecting flight to Yankee, maybe about 1/3rd of the passengers will be Naija peeps, while the others were foreigners. But since 2010, i've been using direct flights from NY straight to Naija, and vice versa....And there has been no time that the plane wasn't filled up. As in ehhn, that na when I been confirm say Naija peeps dey travel for me jare......DAYUM......

If you go to Lagos Int'l airport anyday after 6pm, I swear you go think say you dey Oshodi market......The place be mad crowded, and all flights leaving out of the country are always crazy filled up. Sometimes flight ticket could be as much as N400,000 to yankee, but that no go stop the plane from being filled up. Mehn, F**k that, people get money for Naija jare....thats why the few airlines (AirFrance, Lufthansa, KLM, British Airways, Delta, Emirates, etc) that have agreed to come to Naija, are making crazy money from us. Well, thanks to our govt  for assisting them in achieving this.