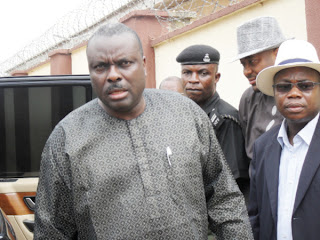 There are strong indications that Nigerians who stormed a London Court with T-shirts inscription such as "Free Ibori" and "Deltans want Ibori Back," to witness the trial of former governor of Delta State, Chief James Onanefe Ibori may be arrested by the British authority if it is disco-vered that the pro-test was illegal.


Okay this is what I dont understand. Some people are ready to die for someone, but yet, that someone no even sabi or send for them sef :(
Thats why these days, I no like to dey get into any unnecessary argument with friends regarding an athlete or any other celebrity......cos at the end of the argument, i quietly ask myself "you don loose your voice finish where you dey try support person, but yet, the so called person wey you dey support no even know if you dey exist."   :(

The status of the people who were present at the Southwark Crown Court, venue of the trial, are now subject of investigations and scrutiny by the authority to ascertain their migra-tion status, while those who are residents in the country illegally risk deportation in line with United Kingdom immi-gration laws..........HA HA HA HA HA HA


I can guarantee you that after the British authority made such statement about deportation, i swear you no go see any Naija person near that court again. Being in london for a couple of months last year, i can strongly say that there are more illegal Naija peeps in London, than the legal ones. As in ehn, almost everyone I came across over there were either illegal, or their visa was about to expire in any minute.....HA HA. I guess thats why a lot of them make their living through yahoo and other crazy business :(


Anyways its just a shame to know that there a lot of fools in Naija that are ready to risk their life for someone in power who they've never met before, but only heard about; a leader who has had zero contribution to the development of his community and doesnt give a sh** about these people fighting for him; or a leader who goes to your community and shares peanuts to you and your elders in order to support him and promote thuggery within the community.


Now I'm really beginning to believe that some people do think through their a** for real. Big Big shame to all those idiots that are still supporting Ibori. The dude is a major criminal, and I hope he gets punished in a major way too. Period!!!


and thanks again to British govt for using deportation as a threat. una know every ehh :)