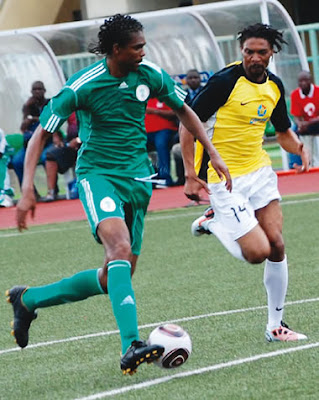 So I'm sure most of you have heard that Kanu Nwankwo recently retired from football last week or so. To be honest i was very happy in the sense that he retired in a very nice way. Like come on, he has won every championship you can think about (except wold cup tho).  So i was reading one of the papers online, and i just came across a statement which he just made during his retirement.


The Portsmouth forward had an elaborate pull-out from the Eagles with his testimonial at the Teslim Balogun Stadium, Lagos. He said his departure from the team did not mean he had quit football.
"I'm still in football; I'm still playing for my club Portsmouth. I've only decided to leave the national team," Kanu said.

But wait ohh...i thought this dude actually retired from both national and club level...as in i thought he closed the chapter of football in his life. Come on, this nukka is like 62yrs old, and he's still wants to play ball during this generation of Messi and Ronaldo.....u've made all the fame and money you need in life, so why you no wan quit kpata kpata huh? My guy no fit even run again sef......ha ha. It even hurts me more when i see him trying to run so fast for the ball.....I no just know why we no dey respect ourselves sometimes :(
I remember when i went to play pro football last yr in Asia, i swear i saw some Naija peeps there that were telling me how the played for all dem Naija clubs during the 80's and early 90's.......and they still here trying to get a football team....and i'm like WTF????  But on paper, their ages ranged from 28-32.

Therefore Uncle Kanu it would be great of you could retire entirely from anything that has to do with ball....this way you can have enough time to stat enjoying your money. Most of us do really care for you and thats why we dey beg you to STOP for goodness sake :(

And speaking of retirement.....that Camerounian dude on the right def need to be way retired even before kanu....their ages combined should be over 100 and smth.....we need to see newer talents from Africa......JEEZ...whats wrong with these people yo???
Posted by alex