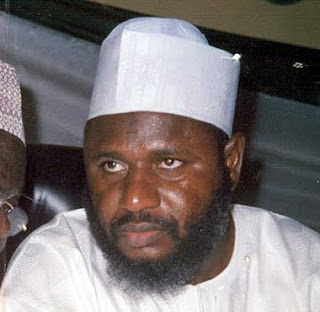 Yes you heard it right. This sexual predator, Ahmed Sani just married a 13 yr old Egyptian girl, and has recieved continuous criticism for marrying the pikin.

wtf..wtf..wft.....WHATTA HELL WOULD THIS MAN ACTUALLY BE DOING WITH A GIRL WHO IS STILL IN THE PROCESS OF GROWING PUBIC HAIR AND A PROTRUDING BALL FROM HER CHEST?

The Orangutan looking mo-fo allegedly paid $100,000 as the bride price to the girl's parents.

You see this is just sickening and a very disturbing. Religion or no religion, I think its about time parents of the victims (young girls)  should give these girls the opportunity to at least reach their adolescent age before they start handing them over to pedophiles like this man.

The is a very painful situation that often occurs, especially in the North . Anyways I commend the National Council of Women Societies for condemning and mounting a campaign against such obnoxious act

The parents of the girl should certainly be charged for foolishness and selling a minor. As for this my guy wey dey here, there's just a lot to charge him......Ugliness; Abuse of power; stealing of public funds to marry a minor; marrying a minor; and ugliness untop again.
Posted by alex