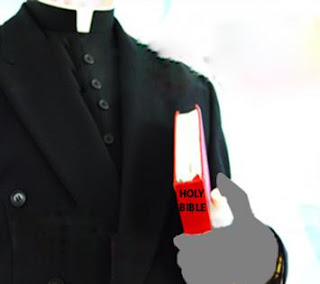 One thing i know for sure be say if Naija was a sophisticated as Yankee or England (in terms of video cameras and being able to detect crimes successfully) I swear so many ridiculous and crazy things will be brought to light.

39 yrs old pastor in PH was just arrested for defiling a 4 yrs old girl........AS IN 4 FREAKING YRS!!!
The lil girl complained to her mumsi bout pains down there, and told her mumsi that the pastor was the one that touched her there. When the police went to arrest him, at first, my guy been dey deny the thing, but he later confessed that he did it in her anus.  ???????????????

"Police source said he told his interrogators that he deliberately avoided the girl's private part because his big 'manhood' could do irreparable damage to the baby."................WHATTA F#%K???????
The suspect blamed satan for his shameless act and begged for leniency.....(yeah yeah, as usual, the devil is being blamed for every damn thing...both the ones im do, and the ones wey im no even know about)

This is probably one of the most disgusting incidents i've ever heard. And later people begin to wonder why i feel that 98% of Naija pastors are fake....And yes i said it...FAKE!!!!